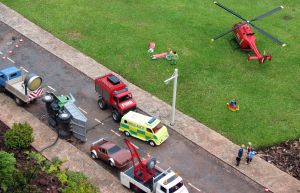 A few weeks ago in Knoxville, two people lost their lives when they were involved in a chain reaction accident that was caused by unanticipated slowing traffic. According to a report by KNOXNEWS.com, the accident occurred on I-40 East at the Asheville Highway interchange. Evidently, a semi-truck was behind a small pick-up truck that was behind an SUV. As the SUV and the pick-up truck slowed because of upcoming traffic, the semi-truck rammed into the back of the pick-up, sending it into the back of the SUV.

The force from the semi-truck colliding with the rear of the pick-up truck caused the small truck to crush. Both occupants inside the pick-up truck were pronounced dead at the scene. One other person was also taken to the hospital as a result of the accident.

That was not all, however. Due to the chaos caused by the accident, another small accident occurred on I-40 just moments later when a truck swerved into a wall, bounced off, and then crashed into a tractor trailer. One person involved in the second accident was taken to the hospital with moderate injuries.

When an accident involves just two cars, it is often fairly straightforward to determine who was at fault. However, in chain reaction accidents, it can be more complex because of the number of vehicles and drivers involved.

Generally speaking, if the person who caused the initial accident was negligent in driving their vehicle, they can often be held liable for all accidents that stem from that original crash.

However, there may also be others in the chain who are liable to chain reaction accident victims. If an accident occurs ahead of a driver, and that driver could have avoided the collision had they been paying attention, that driver may also be at fault for causing a second, related accident.

Recovering in Tennessee for Any Type of Accident

In most cases, the theory used by personal injury plaintiffs in Tennessee to recover from the person who caused their injuries is “negligence.” While the term is used in common English, its legal definition is more complex and requires that a plaintiff prove several elements before he or she can recover for their injuries. To learn more about the laws of negligence in Tennessee and how they apply to Tennessee accident victims, speak with a dedicated Tennessee personal injury attorney.

Have You Been Injured in a Tennessee Accident?